As most of you know Minkeys/grads hockey starts this weekend. The Junior Committee have been working hard to find coaches for this but they are still a couple short. You don't need to have any coaching experience just a willingness to give it a go as you will be supported with guidance from the Junior Committee. If you are a parent, grandparent or family member of a minkey grad participant and you would like to give it a go please get in contact with our junior director Dave Abbott   END_OF_DOCUMENT_TOKEN_TO_BE_REPLACED

Welcome to the end of the working week and the start to a weekend of Hockey. Get along to support your team and club. Good luck to the J7/8 and J9/10 teams in your first fixture of the season. Play well our J5/6 teams in the Grading Carnival at Yokine on Saturday. Don't forget to come along to the first Social function of the year - Initial Party 7pm at the clubrooms. Tickets at the door $5 cover charge. Come dressed as your Initial. Remember supporting these functions help to keep   END_OF_DOCUMENT_TOKEN_TO_BE_REPLACED

FAMILY PASTA NIGHT 26th May 2016 6pm - 7.30pm An Informal dinner and a chance to chat or an easy meal to take home after training. Either way its an offer you can't refuse! Lock it in Eddie! More details closer to the date. Questions?? Email our Junior Director Dave or see one of the junior committee. juniordirector@rockinghamhockey.org.au Location Redbacks Hockey Clubrooms, Larkhill   END_OF_DOCUMENT_TOKEN_TO_BE_REPLACED

Just a notice that registrations are open for a range of PHS hosted Level 1 courses, and PHS hosted Level 2 coaching courses. If you have participants interested in attending the Level 1 course on 17th July from 7.00am-12.00pm hosted at PHS. Register through the following link: https://level-1-coaching-course.eventdesq.com Registrations are also open for a Level 2 course - day 1 Saturday 22nd October and the second day to be held in February 2017. If you are interested in attending or know   END_OF_DOCUMENT_TOKEN_TO_BE_REPLACED 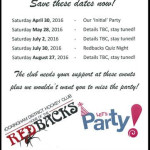 Hi all, Now that the season has started it is time to start having some fun as a Redback family. Please save these dates in your calendar and get along to the social functions the club organises for you, our members. If you have SOME GREAT IDEAS we would love you to join the social committee. Email vicepresident@rockinghamhockey.org.au   END_OF_DOCUMENT_TOKEN_TO_BE_REPLACED 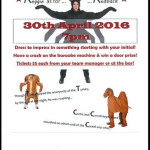 Our INITIAL function for 2016 is on the 30th April at 7 pm at the Clubrooms. See the flyer attached for more info. Come dressed as your initial and grab your friends and family (Open to non members as well, the more the merrier) and head out for a great night . See your team managers for tickets or get them at the bar. For more info email vicepresident@rockinghamhockey.org.au   END_OF_DOCUMENT_TOKEN_TO_BE_REPLACED 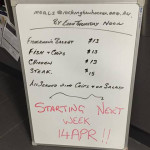 Thursday night dinner are Back for 2016.!!! They start this Thursday 14th April. Please email your order by noon Thurs to meals@rockinghamhockey.org.au Menu Fishermans Basket chips and salad, Chcken, Chips and Salad, Fish Chips and Salad - All $13 Each Steak Chips and Salad - $15 If you are not training that night bring your family down for a meal and support the club. If you are training why go home and cook, stay for a meal.   END_OF_DOCUMENT_TOKEN_TO_BE_REPLACED

It has been a busy week , the Club rooms items have been moved back into place for our first big day on Sunday. We will be needing a great deal of help with running the facilities, Duty manager Tech Bench Bar duty ( must have Current RSA) Bar Manager Canteen Running Raffles If you could let me know if you're available via email, phone call or message here, it would help make a successful day. Remember many hands make light work so even if it is for an hour. Every   END_OF_DOCUMENT_TOKEN_TO_BE_REPLACED

Kick off the Easter long weekend with International Hockey at Perth Hockey Stadium Begin the Easter long weekend with not just one, but TWO (2) International matches at Perth Hockey Stadium. Both national teams, the Kookaburras and Hockeyroos, are ramping up their preparations for the 2016 Olympic Games. On Thursday 24th March, the Kookaburras take on Malaysia at 3:30pm, before the Hockeyroos play a test match against China at 6:00pm. Western Australia’s very own Ashleigh Nelson is   END_OF_DOCUMENT_TOKEN_TO_BE_REPLACED 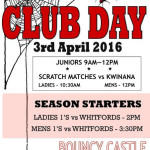 Come along and join in the fun at our club day to kick of Season 2016. See newsletter or flyer attached for details. Looking forward to seeing you all there. Location Larkhill Sportsplex   END_OF_DOCUMENT_TOKEN_TO_BE_REPLACED